Prince Andrew will use his central role at Westminster Abbey as a springboard to support his mother at a Platinum Jubilee service at St Paul’s Cathedral in June and is not bothered if ‘public opinion is against him’, it was claimed today.

The Duke of York is said to have been ’emboldened’ by the Queen’s decision to travel with him from Windsor and to let him walk her to and from her seat on Tuesday at an event watched by millions.

It came amid reports of a rift between palace aides over the decision and explosive claims that senior members of the Royal Family only found out the night before.

The shamed royal is also disinterested in ‘the weight of public opinion’ against him, according to The Sun, especially after the Queen is reported to have overruled Prince Charles and Prince William to allow her disgraced son to escort her.

‘While he accepts that he no longer has a fully participatory role as a core member of the firm, there will be family events where he will want to be present,’ an insider said. 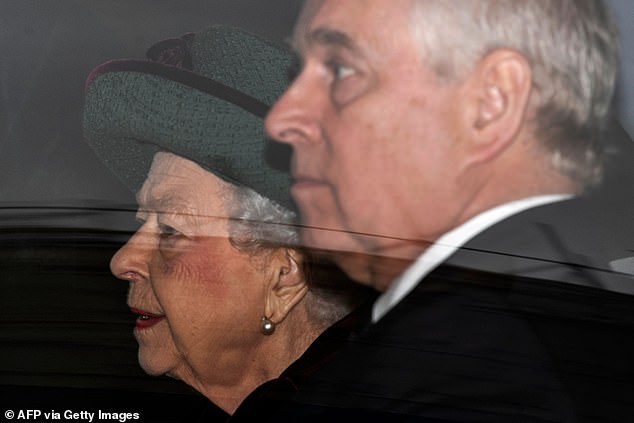 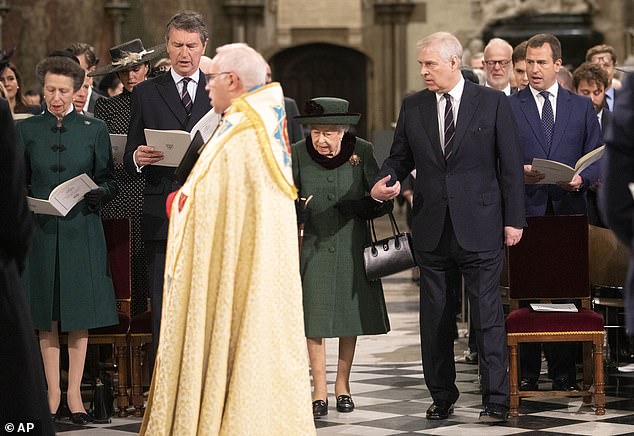 The Queen held onto Andrew’s elbow with her left hand and had a walking stick in her right at Westminster Abbey on Tuesday. He is said to be emboldened to support her again at the Platinum Jubilee 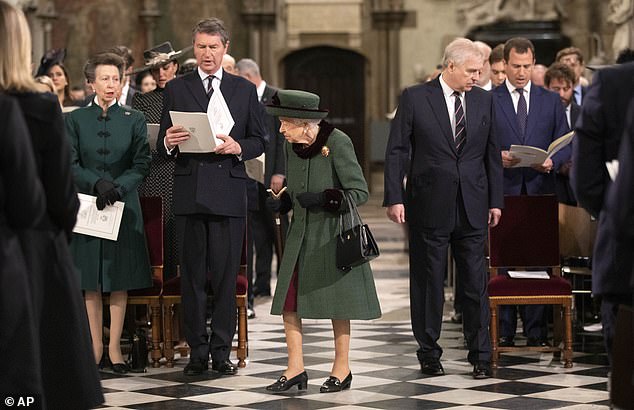 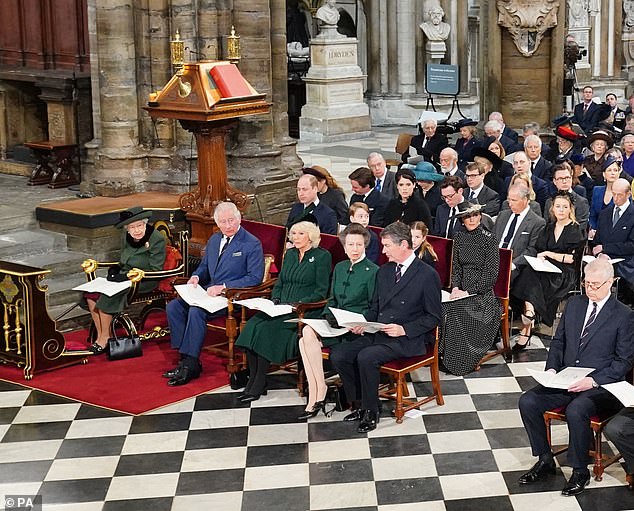 The Queen is pictured on the left, and Prince Andrew on the right during the service of thanksgiving for Philip on Tuesday

Andrew is trying to become a replacement for Prince Philip as the Queen’s unofficial adviser and confidante, it has been claimed.

The Duke of York is to be the most regular visitor to the Queen at Windsor Castle. He has no official royal duties left and lives just three miles away at his seven-bedroom Royal Lodge home.

But royal aides have no involvement in discussions between the Queen and her so-called ‘favourite son’ after he was effectively kicked out of the Royal Family by the Queen in January, reported the Daily Telegraph.

And their recent conversations would have come at a time when Prince William was out of the country with Kate Middleton on a royal tour in the Caribbean last week, while Prince Charles was on tour in Ireland with Camilla.

The Queen clearly still values Andrew as a family member – and there are concerns within royal circles that he could use his role at Tuesday’s memorial to put in an appearance over the Platinum Jubilee weekend this June.

While Prince Charles and Prince William feel Andrew should play no part in any royal events, speculation is now mounting that the Queen could invite him to the service at St Paul’s Cathedral on June 3 to mark her jubilee.

His appearance walking down the aisle with her at Westminster Abbey on Tuesday was a surprise to many – including Royal Family members who only found out when it was happening, according to the Telegraph.

One insider claimed: ‘They didn’t know until it happened. The plan changed.’ The idea that he was positioning himself as her ‘plus one’ – and that this only emerged last minute – has been denied by sources close to Andrew.

The Duke of York’s presence at the service had been known for weeks in advance, but his central role was only revealed hours earlier by royal expert Robert Jobson who said Andrew ‘may play a prominent role than we think’ 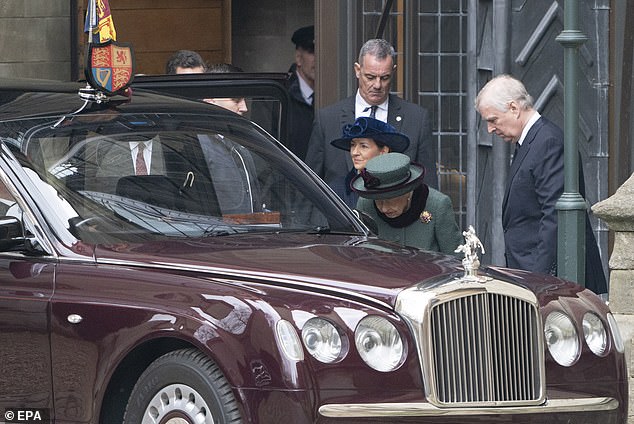 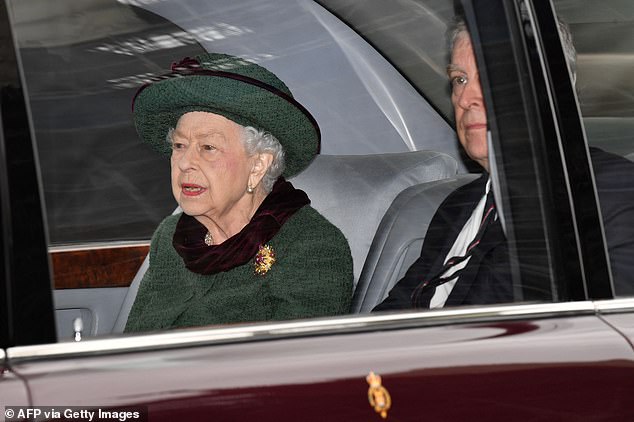 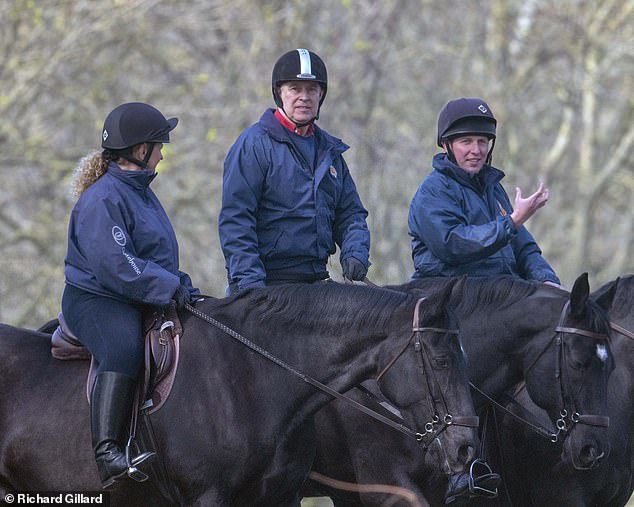 Andrew goes horse riding at Windsor Great Park in Berkshire on Monday, one day before the service for Prince Philip 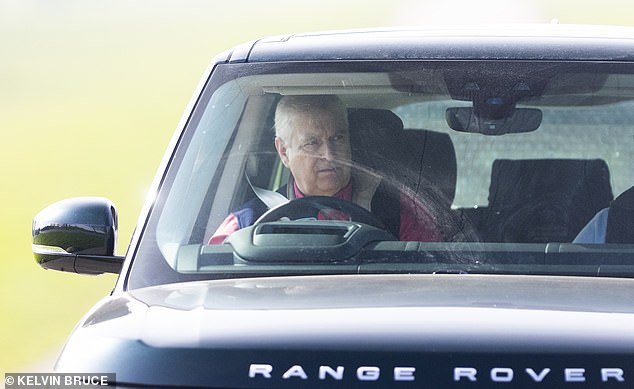 The disgraced royal, who just weeks ago paid millions out of court to settle a civil sex assault case with a woman he said he had never met, accompanied the Queen almost the whole way to her seat in a shock move on Tuesday.

Andrew had been banished from royal life, first bowing out of royal duties in 2019 after his disastrous BBC Newsnight appearance over his friendship with convicted paedophile Jeffrey Epstein.

The Countess of Wessex has taken over the Duke of Edinburgh’s former role as Colonel-in-Chief of The Royal Electrical & Mechanical Engineers (Reme).

Sophie was appointed by the Queen, who is head of the Armed Forces, with the decision announced yesterday – the day after Philip’s memorial service.

Sophie, Countess of Wessex receives members of the Royal Electrical and Mechanical Engineers (Reme) in her new role as Colonel-in-Chief of the Corps, at Buckingham Palace yesterday

The countess was said to be extremely honoured to be following in her father-in-law’s footsteps. Philip held the honorary title for more than 50 years, becoming Colonel-in-Chief of the Corps in 1969.

The countess was among members of the royal family who gathered with the monarch in Philip’s memory at the service of thanksgiving for his life on Tuesday, 11 months after his Covid-restricted funeral.

Formed in 1942, the Reme is responsible for maintaining all the equipment the British Army operates from tanks and helicopters to weapons and communications equipment. The Royal Family said on Twitter how the Corps combined the duke’s ‘enduring support of the Forces, and keen interest in engineering’.

This January, he was stripped of his honorary military titles and patronages by the Queen, and forced to relinquish using his HRH style amid his legal battle.

Virginia Giuffre was suing him for allegedly sexually assaulting her when she was 17 after being trafficked by Epstein.

At the time, Buckingham Palace said: ‘The Duke of York will continue not to undertake any public duties and is defending this case as a private citizen.’

On Tuesday, Andrew was front and centre of Philip’s official memorial service, with his mother holding onto his elbow as they made their way via the shortest route into the Abbey to remember Philip.

If the Jubilee service of thanksgiving in St Paul’s Cathedral on June 3 is considered to be a family occasion, Andrew could be among the congregation, alongside other non-working royals.

Royal expert Joe Little, of Majesty magazine, suggested: ‘I think he will be there. Although the Queen is head of state, she is also head of the family as well and in that capacity all her children should be with her.’

He added the royal family may take stock following the media’s response to Andrew’s role at Philip’s service.

Mr Little said: ‘It is a hard one to predict. It will depend on how the royal family react to some of the newspapers’ front pages today. Of course, they’re not known to react in the way that you think they might.’

Mr Little added: ‘It’s two months away. Nobody would have predicted what would happen yesterday because Andrew was in the order of service to arrive with other members of the family and his daughters at the West Door. This was obviously an 11th hour change.’

The Palace declined to comment on who would attend the St Paul’s service, with a spokesman saying: ‘Our position hasn’t changed since our statement in January.’

Among the headlines in yesterday’s papers were ‘Royals’ ‘dismay’ at Andrew role in Philip service”, ‘The pain… & the stain’ and ‘Royal fallout over Queen’s ultimate act of love’.

Clarence House declined to comment on whether the Prince of Wales was supportive of the decision for Andrew to walk alongside her, and Kensington Palace has yet to comment on where the Duke of Cambridge stands on the issue.

The pre-printed order of service set out the royal family’s arrival sequence, with Andrew due to appear at the main entrance with his daughters and their husbands and walk with them to his seat.

Even after the arrangements changed with Andrew travelling from Windsor to London in a car with the Queen, he was then expected to process from Poets’ Corner behind the monarch while she walked alongside the Dean of Westminster, rather than the duke being at his mother’s side. 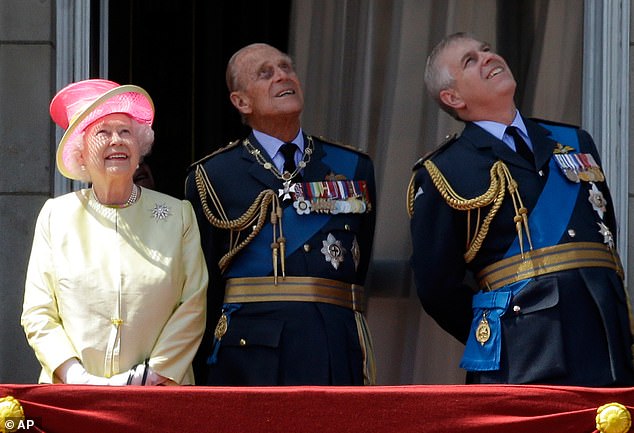 The Queen, Prince Philip and Andrew watch a Royal Air Force flypast from the Buckingham Palace balcony on July 10, 2015 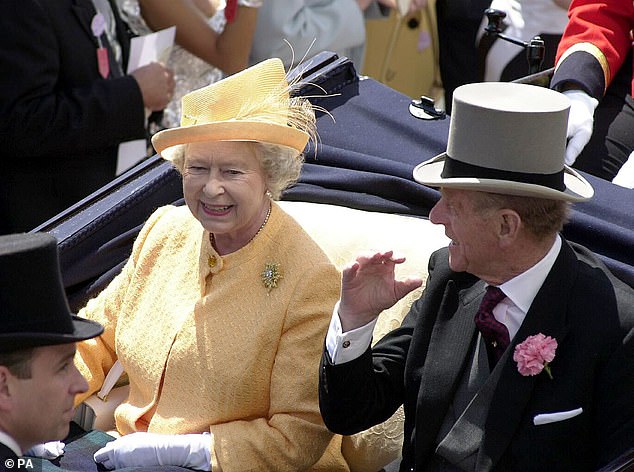 The Queen, Prince Philip and Prince Andrew arrive together in an open top carriage for Royal Ascot on June 21, 2001 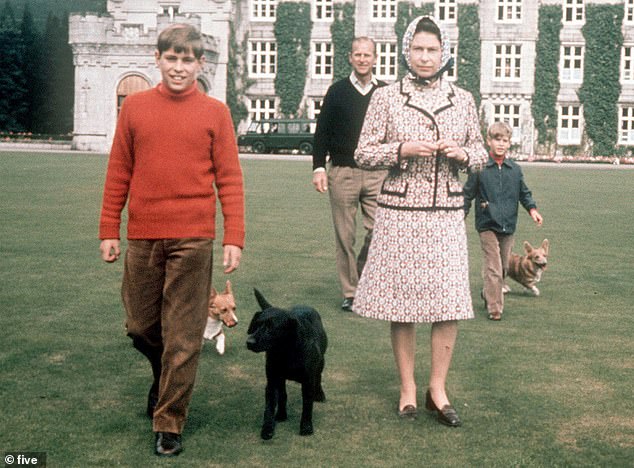 The Queen, Prince Philip, Prince Andrew (left) and Prince Edward (right) in the grounds of Balmoral when Andrew was a child

Andrew remains in the line of succession, and is also still a Counsellor of State.

In the event the Queen cannot undertake her official duties as sovereign on a temporary basis due to illness or absence abroad, two or more Counsellors of State are appointed by Letters Patent to act in her place.

The role of Counsellor of State is undertaken by any spouse of the monarch and the next four adults in the line of succession, currently Charles, William, Harry and Andrew.

Concern over the arrangements, which could only be changed with legislation, has been raised in recent weeks after Charles got Covid and William was away in Dubai at the same time.