Jamie Lee Curtis looked slender in a curve-hugging black mesh dress when she hit the red carpet at the Academy Awards on Sunday afternoon at the Dolby Theater in Hollywood.

This is a stark contrast to the Instagram photos that  she shared in early March where she showed off a large belly, insisting it was really hers. The photo went viral as fans asked if the post could be a stunt.

The beauty must have some tricks – or Spanx – up her sleeve as her body morphs because she looked very slender at the Oscars. 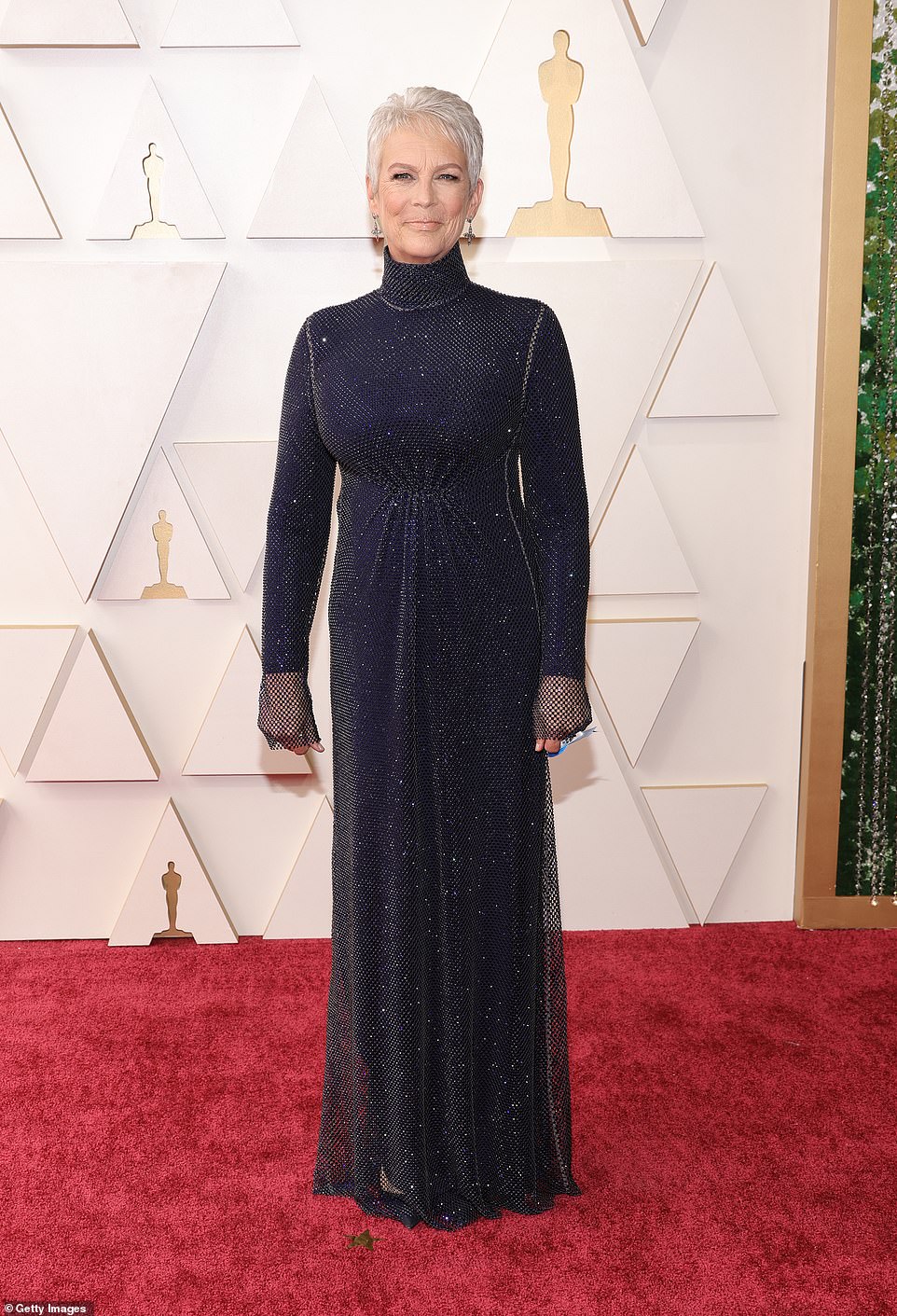 Skinny: Jamie Lee Curtis looked slender in a curve-hugging black mesh dress when she hit the red carpet at the Academy Awards on Sunday afternoon at the Dolby Theater in Hollywood 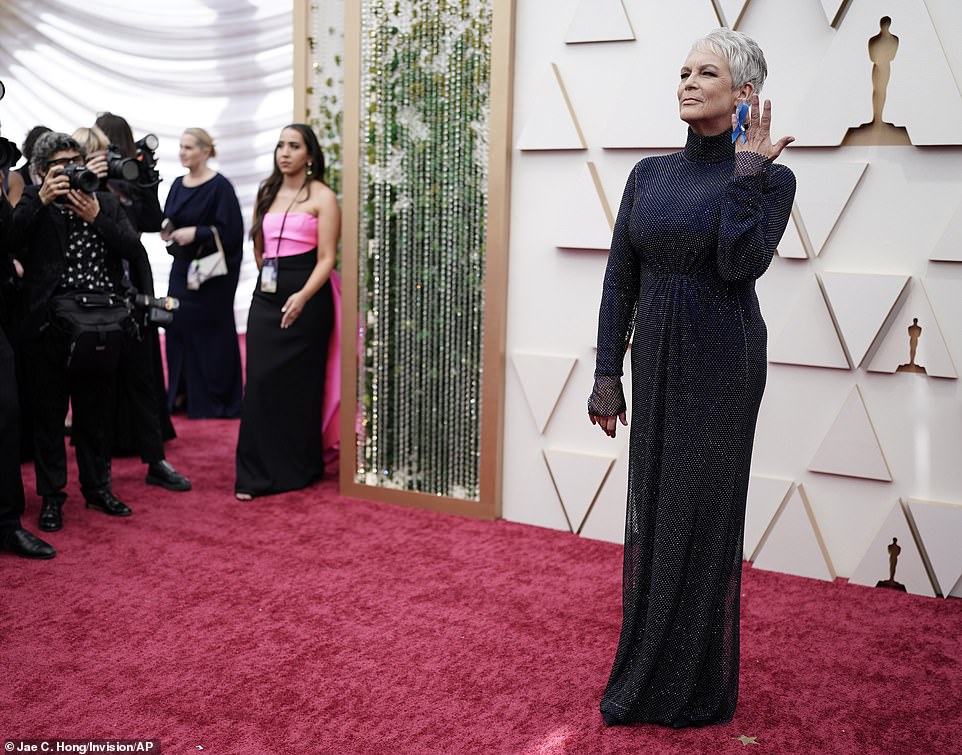 Smart move: The Knives Out actress also had a blue ribbon on her finger that was worn to support the refugees who have fled war torn Ukraine

The Halloween actress looked youthful in a curve-hugging black dress with her light gray hair worn short and brushed back.

The 63-year-old star appeared to be proud to be on the carpet as she posed alone while wearing cross earrings.

She is the daughter of some of the biggest Hollywood greats, Janet Leigh of Psycho fame and Tony Curtis who lit up Some Like It Hot with Marilyn Monroe. 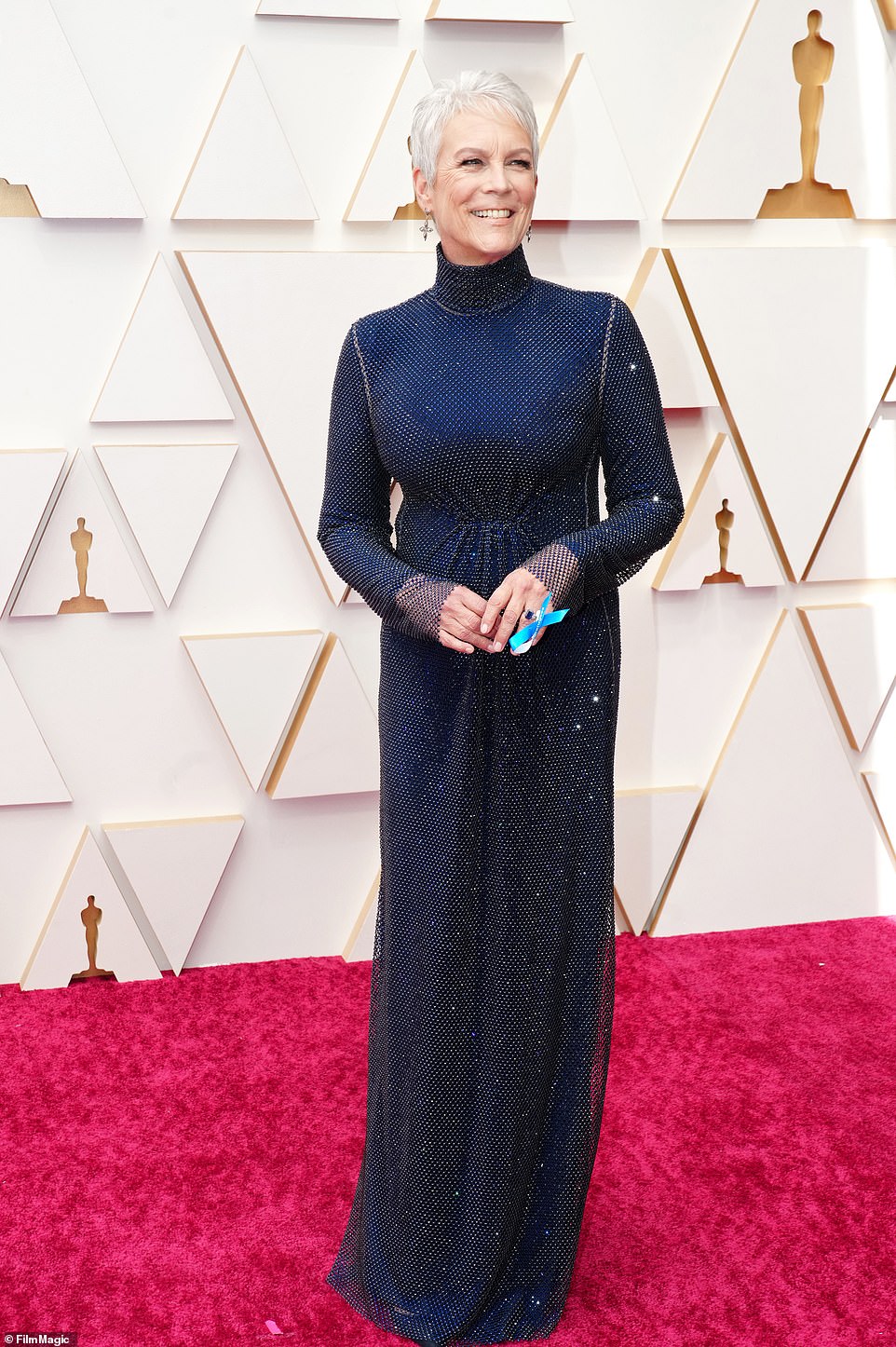 A stunner: The 63-year-old star appeared to be proud to be on the carpet as she posed alone while wearing cross earrings 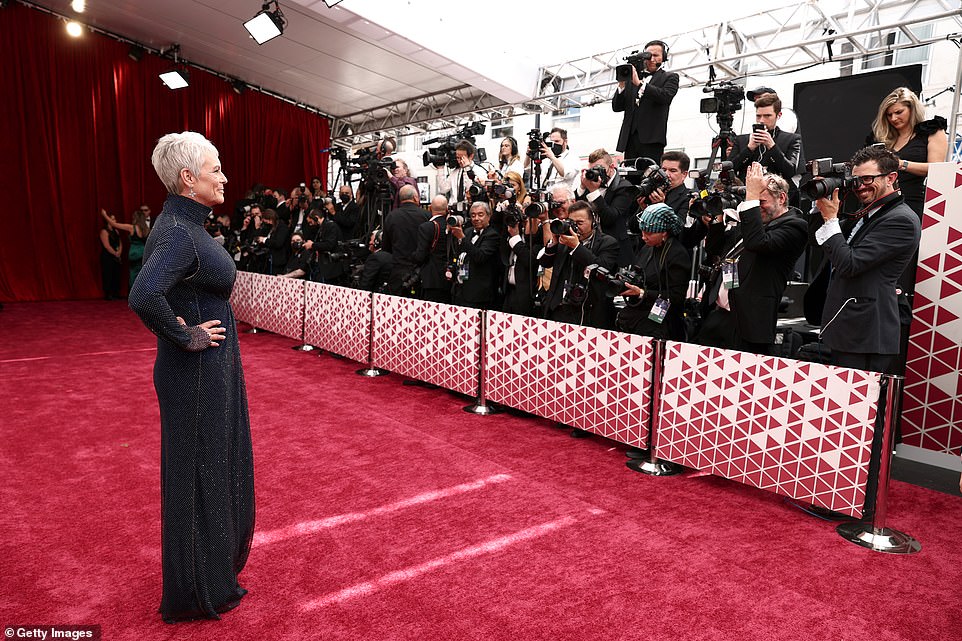 So many fans: There were dozens of photographers taking her photo for the big event on Sunday

The Knives Out actress also had a blue ribbon on her finger that was worn to support the refugees who have fled war torn Ukraine.

In early March Jamie said she defiantly refused to use body prosthetics to play a downtrodden character in her upcoming film Everything All At Once.

Shot just before the coronavirus lockdowns swept the country, the film features Jamie Lee as a stern-looking IRS auditor in a tight-fitting and unflattering polo neck that shows off the star’s tummy.

The actress, who declined to use a prosthetic for the character’s midriff, uploaded an Instagram photo of herself in character with a candid caption about letting her belly out for the role after ‘sucking in my stomach since I was 11.’ 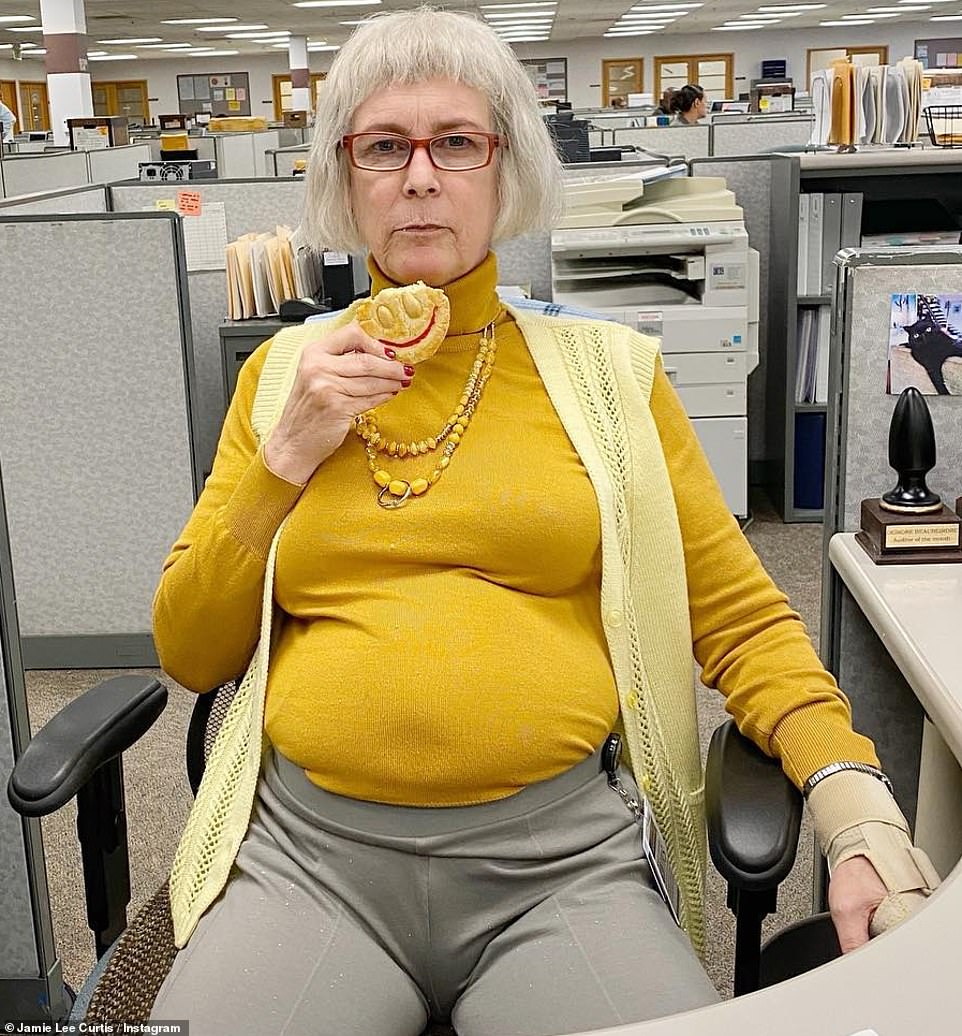 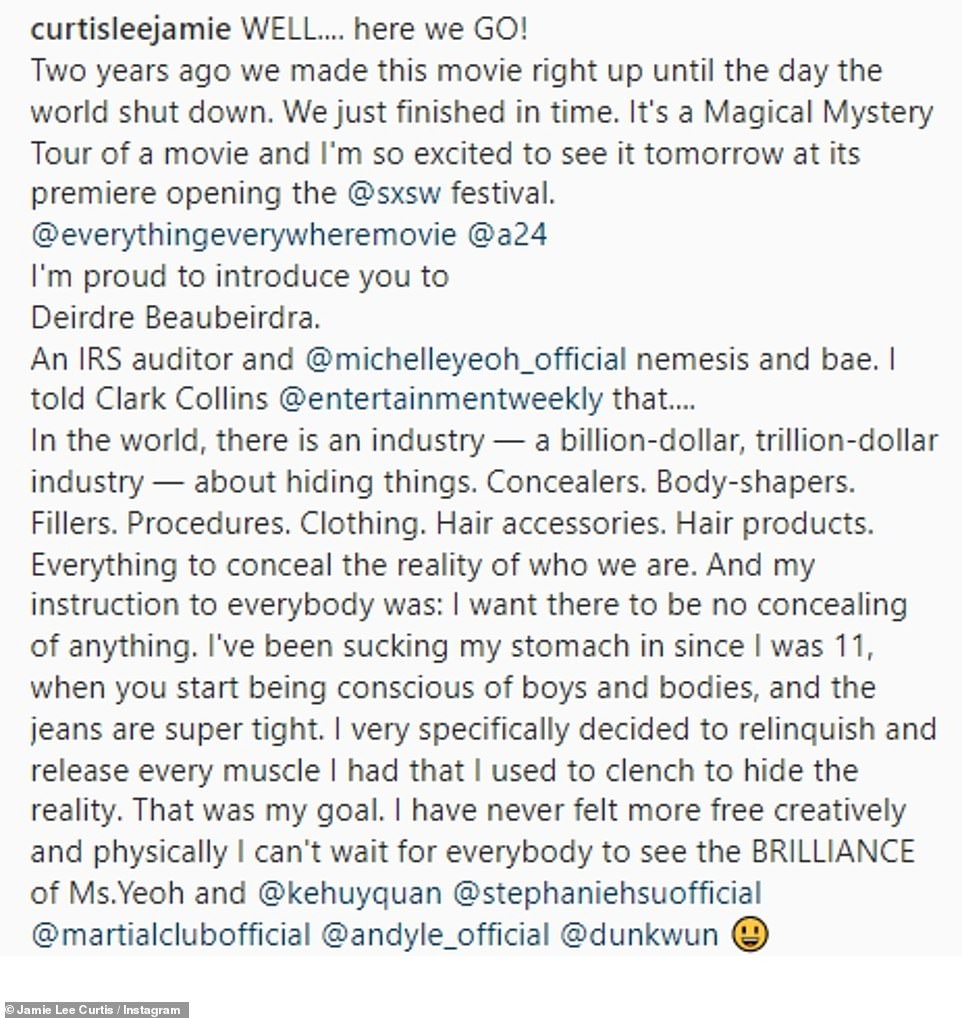 Candid: Curtis unveiled a first look this week of her character in the film Everything All At Once, which allowed her to let her belly out after ‘sucking my stomach in since I was 11’

Jamie Lee is pictured in character sitting in her cubicle wearing a distinctly unimpressed expression and holding a half-eaten cookie.

‘WELL…. here we GO!’ she crowed in her Instagram caption. ‘Two years ago we made this movie right up until the day the world shut down. We just finished in time. It’s a Magical Mystery Tour of a movie and I’m so excited to see it tomorrow at its premiere opening the @sxsw festival. @everythingeverywheremovie @a24.’

Jamie Lee, whose parents were Some Like It Hot heartthrob Tony Curtis and Psycho star Janet Leigh, wrote: ‘I’m proud to introduce you to Deirdre Beaubeirdra.’

She described her character as an ‘IRS auditor’ as well as the ‘nemesis and bae’ of Michelle Yeoh’s leading character Evelyn Wang. 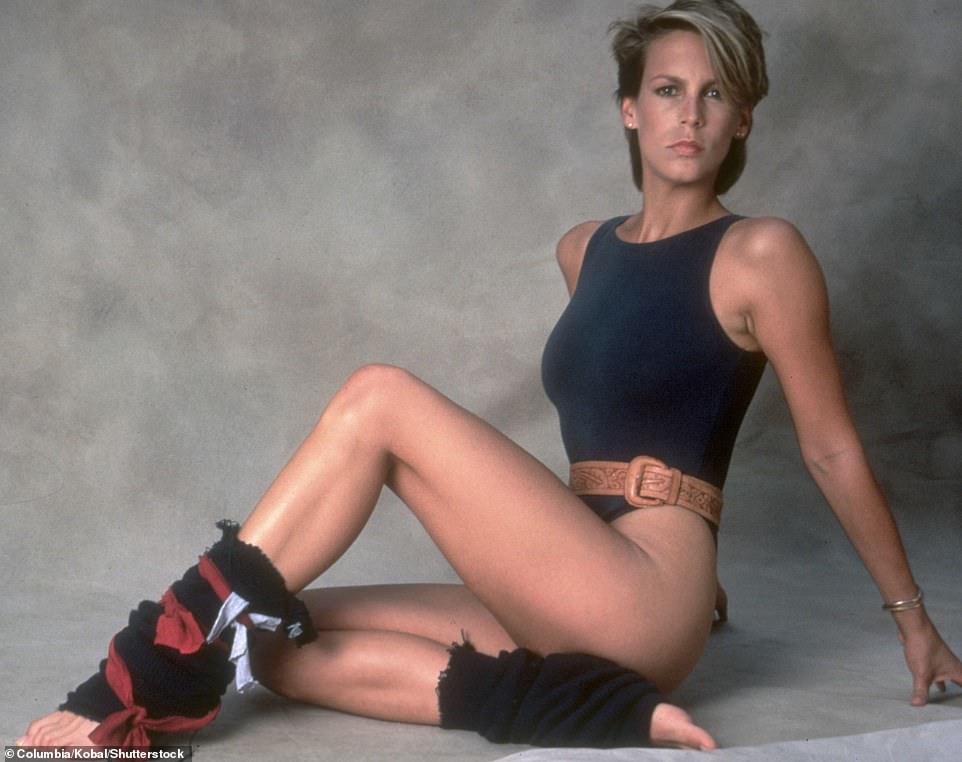 Pin-up: Jamie Lee – who claims to have been sucking in her tummy since she was 11 – was known in the 80s for her athletic figure (Pictured above in the 1985 film Perfect)

‘In the world, there is an industry – a billion-dollar, trillion-dollar industry – about hiding things,’ she added. ‘Concealers. Body-shapers. Fillers. Procedures. Clothing. Hair accessories. Hair products. Everything to conceal the reality of who we are. And my instruction to everybody was: I want there to be no concealing of anything.’

Jamie Lee revealed: ‘I’ve been sucking my stomach in since I was 11, when you start being conscious of boys and bodies, and the jeans are super tight. I very specifically decided to relinquish and release every muscle I had that I used to clench to hide the reality. That was my goal.’

The Halloween star dished: ‘I have never felt more free creatively and physically I can’t wait for everybody to see the BRILLIANCE of Ms.Yeoh and @kehuyquan @stephaniehsuofficial @martialclubofficial @andyle_official @dunkwun.’

One of the directors of the film, Daniel Kwan, recently told Entertainment Weekly that Jamie Lee was not wearing a prosthetic stomach for the role. 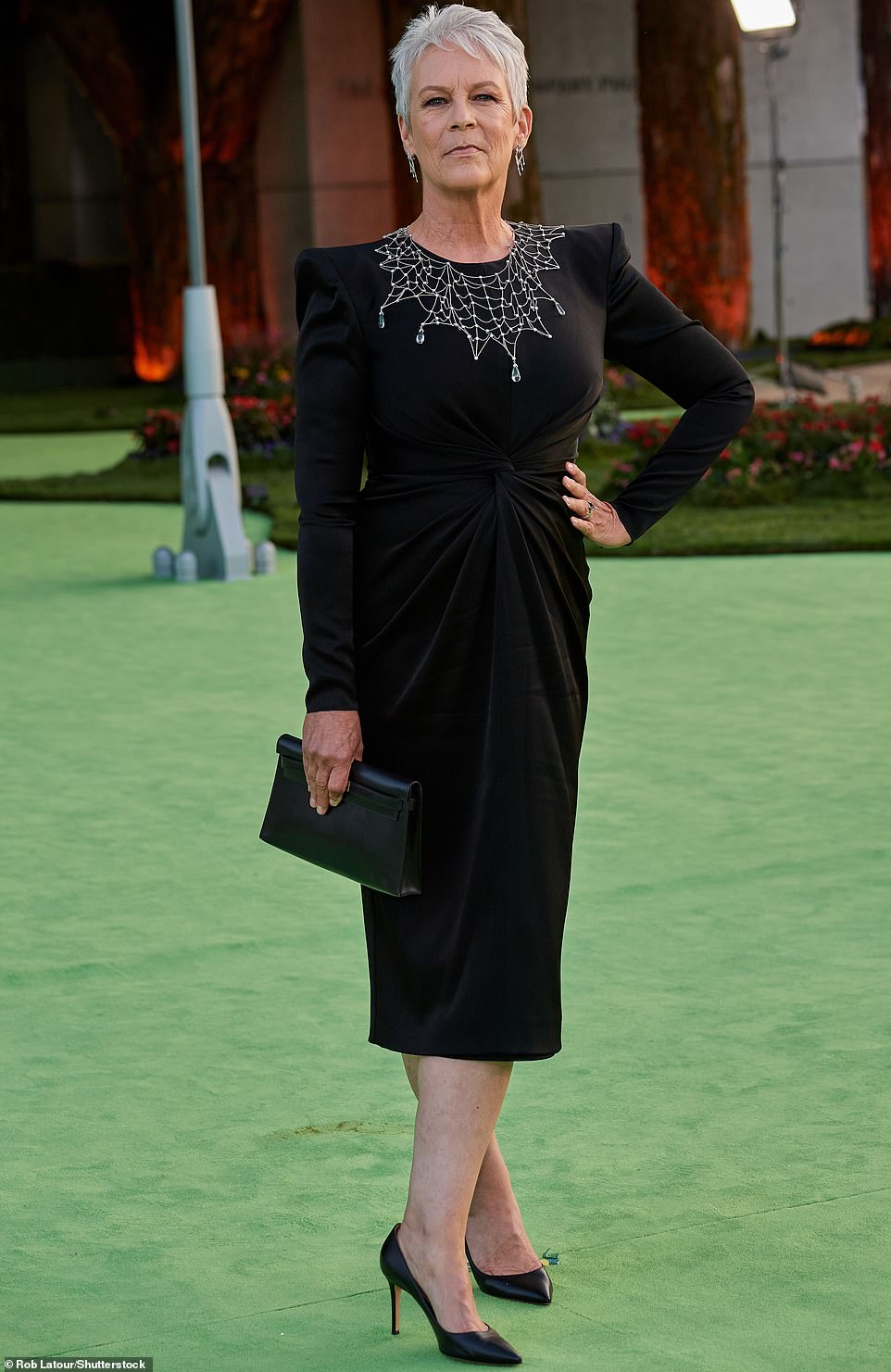 Chic to the hilt: Jamie Lee is pictured in a glamorous aspect attending the opening gala for the Academy Museum Of Motion Pictures in Los Angeles last year

‘Everyone assumes that her belly in the movie is a prosthetic, but it’s actually her real belly. She was grateful that she was allowed to just let it out,’ he said.

His co-director Daniel Scheinert also offered a glimpse into Jamie Lee’s process of preparing for the sci-fi comedy.

‘Immediately after signing up, she would text us photos of weird outfits and weird hairdos,’ he shared with the magazine. 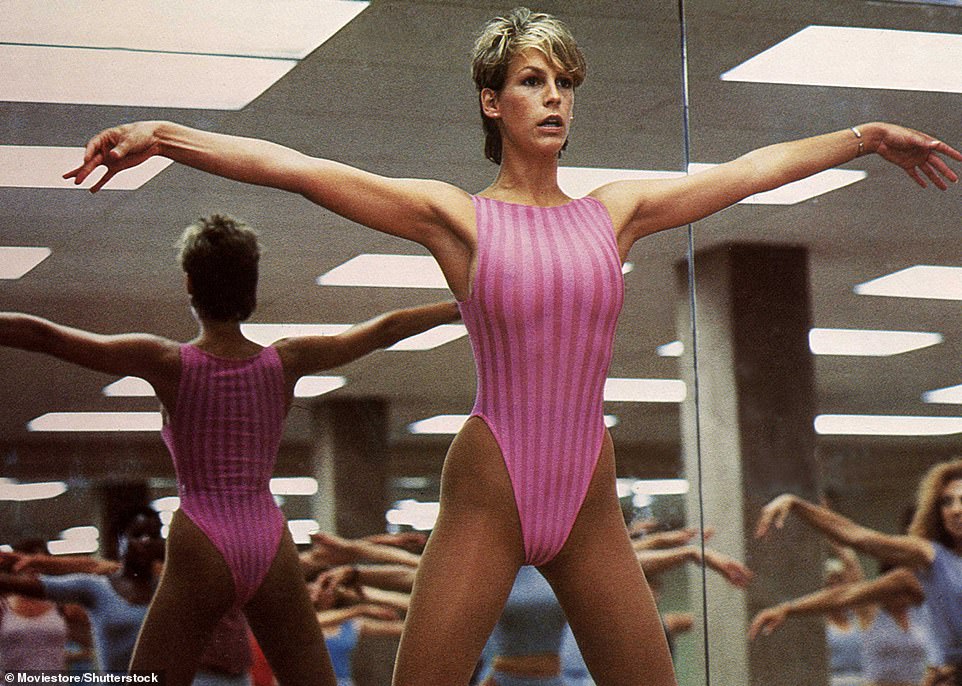 Bombshell: The actress as seen in the 1985 movie Perfect showing off her athletic figure 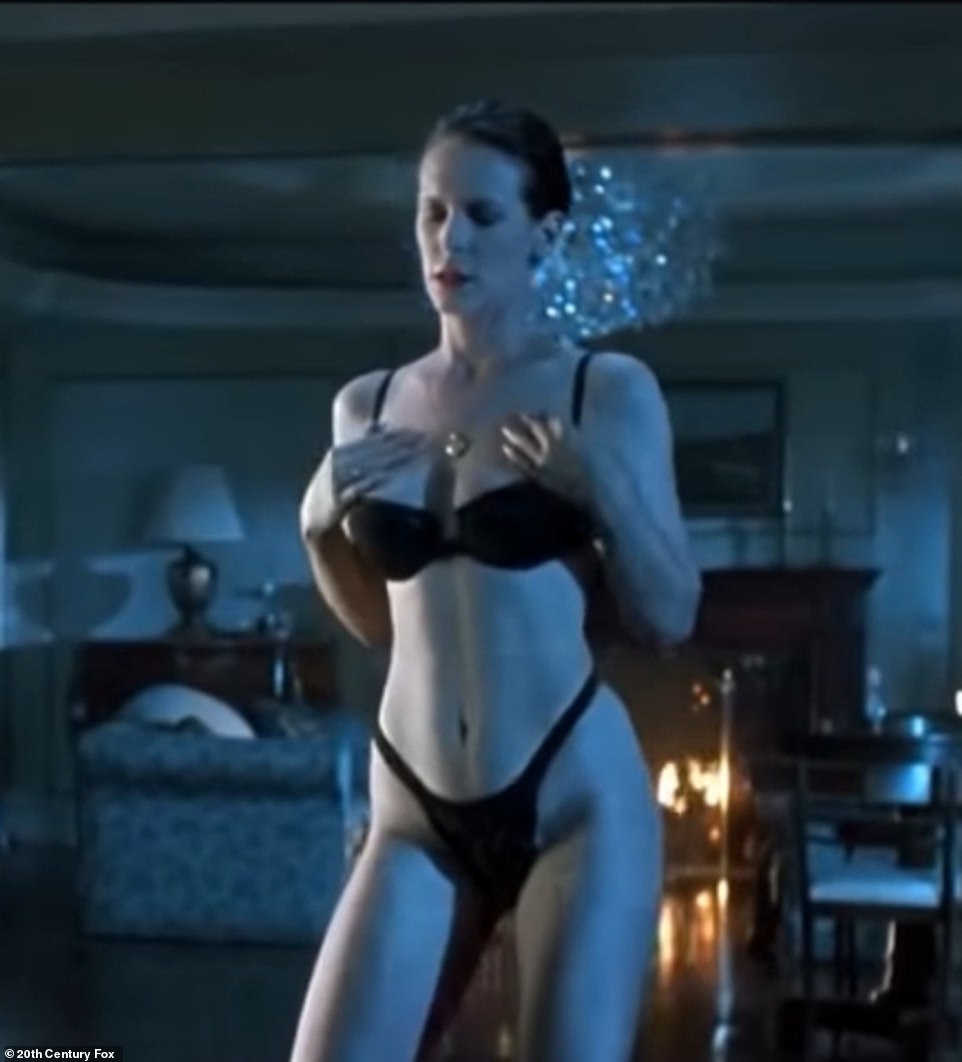 Bombshell: The star is seen in the 1994 action movie True Lies doing a famous striptease scene when she was 51 years old

‘There was one photo of an IRS auditor that Dan Kwan had found online – I mean, maybe she worked in a DMV, I don’t know – but this one photo, Jamie was like: “That’s incredible, please let me be her – please, please, please, please.” And that photo became the reference for the hairdo and the outfit.’

During an interview with More magazine years ago, Jamie Lee frankly discussed how fixated her movie star mother was on staying svelte.

‘I think the most complicated relationship my mother had, both loving and often cruel, was with her own body,’ said Jamie Lee. 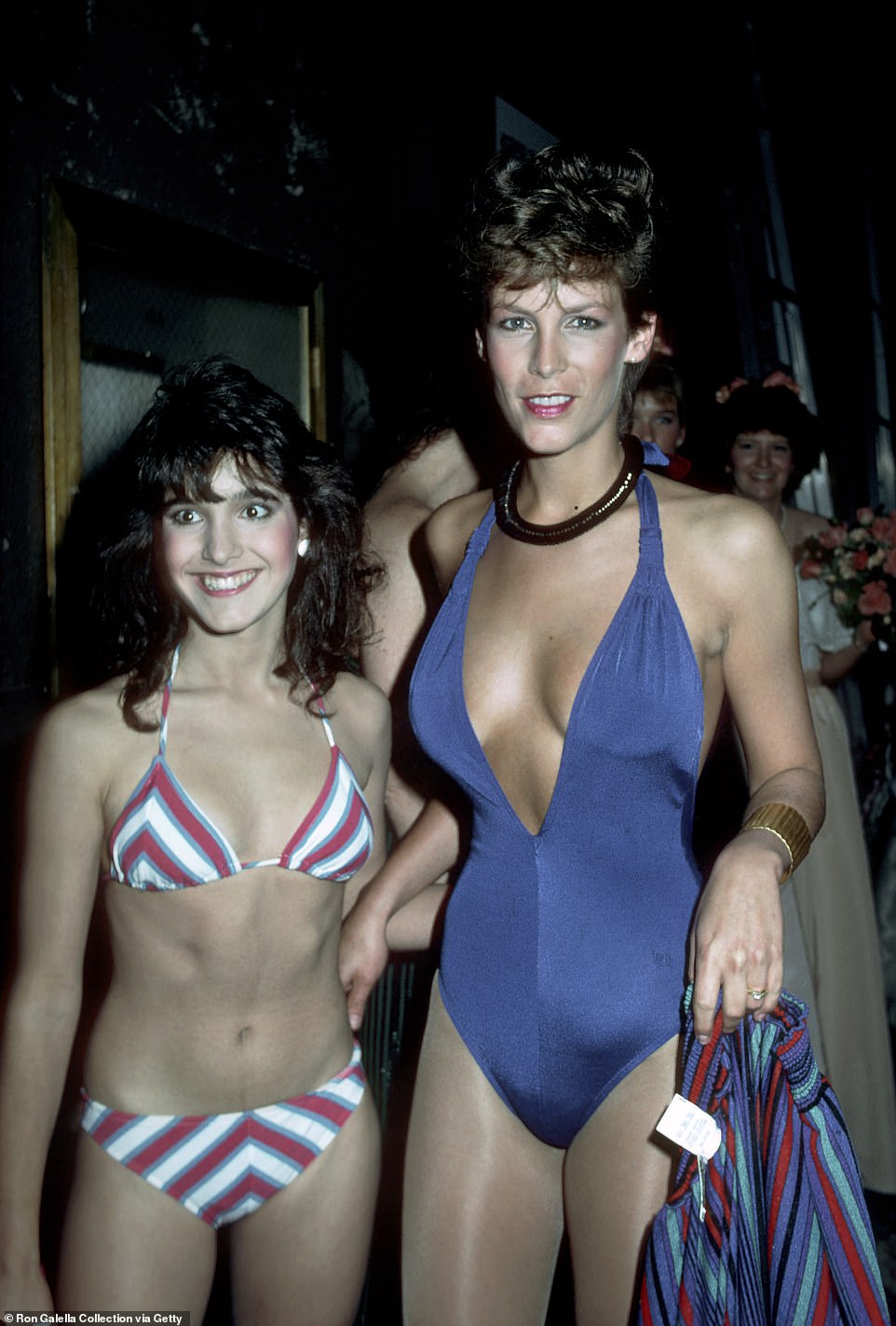 Figure: The star is pictured with Danielle Brisbois in 1983 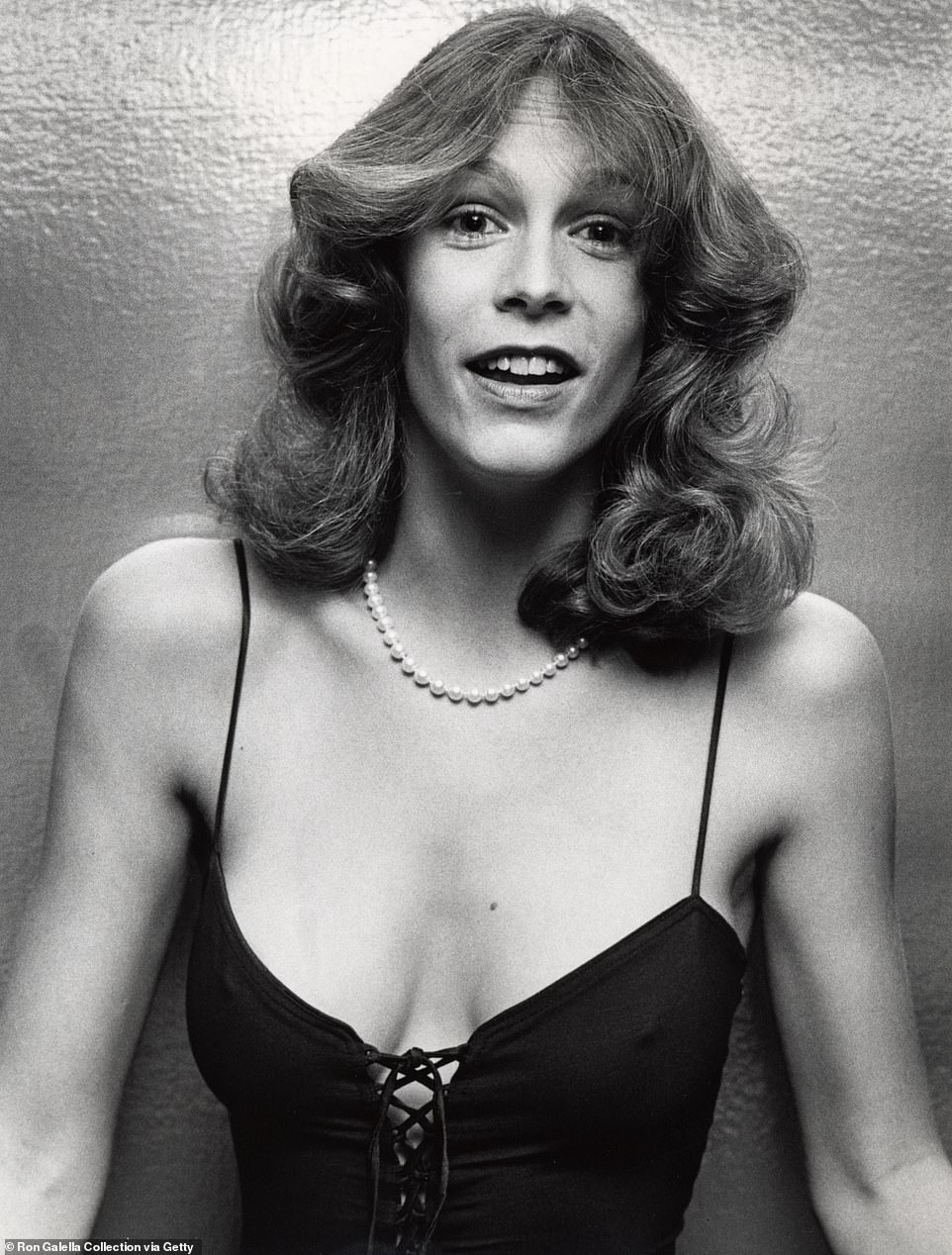 Throwback: Jamie Lee had ‘been sucking my stomach in since I was 11, when you start being conscious of boys and bodies, and the jeans are super tight’; pictured aged 19 in 1978

‘Her face was undeniably beautiful, like a shot of something strong, and her body – that body was the chaser. She was intoxicating.’

Jamie Lee reflected: ‘Like anyone who becomes famous for what they look like, when that commodity starts to change, the relationship with it deteriorates.’

She dished: ‘Her friends noted her slimness by calling her Bird Legs, and my mother was incredibly proud that she returned to her 20-inch waist mere weeks after pregnancies; she judged other actresses whose bodies grew and softened.’ 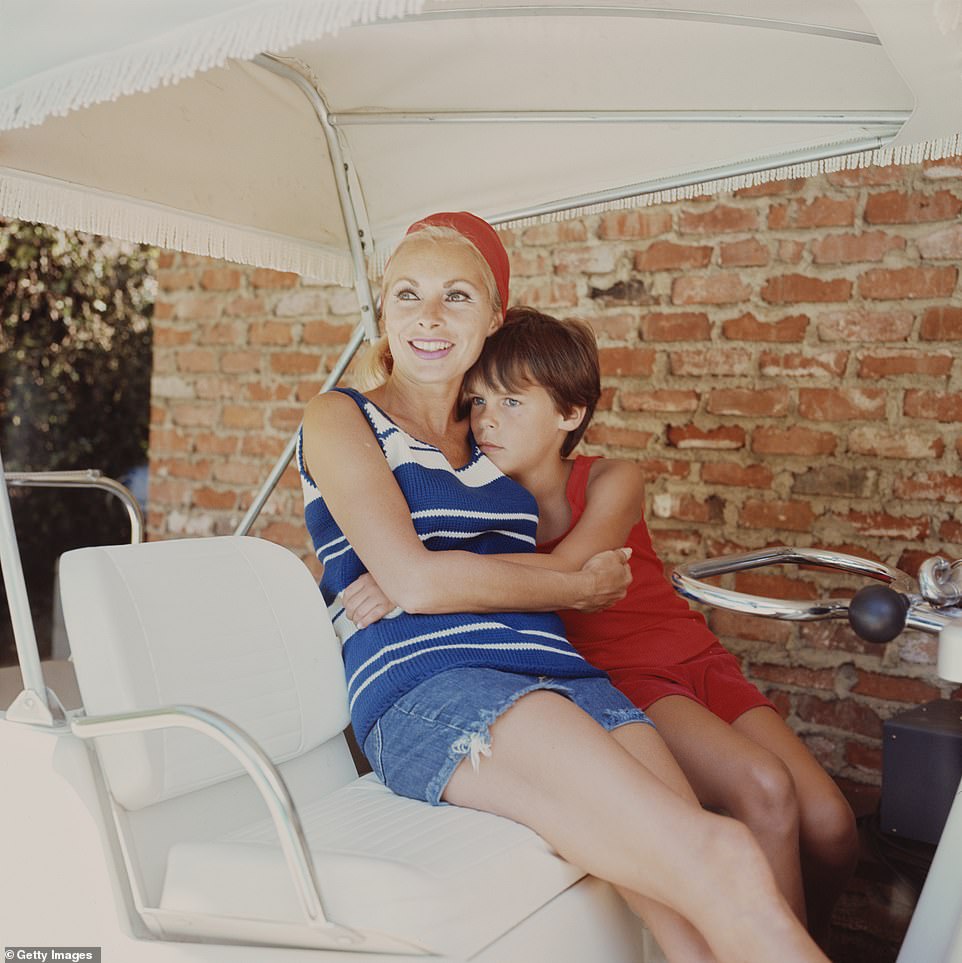 Throwback: During an interview with More, Jamie Lee discussed how fixated her movie star mother Janet Leigh was on staying svelte; pictured above in 1967

Shortly after posting her first-look image from Everything All At Once to Instagram, Jamie Lee got to work Austin promoting the project.

She was attending the South By Southwest film festival where she was interviewed by Stephanie Hsu at the Variety Studio.

During the sit-down, Jamie Lee was accompanied by Michelle and their co-star Ke Huy Quan as well as both of their directors.

Jamie Lee cut an elegant figure in a sleek white blazer over a matching top, providing a fashionable contrast to her black slacks and leather boots.

The Power Of The Dog (Netflix) 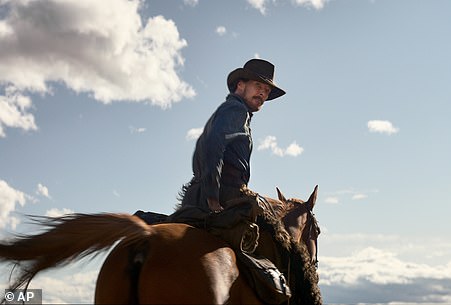 On the saddle: Power Of The Dog received several nominations including Best Picture

ACTRESS IN A SUPPORTING ROLE

Kirsten Dunst- The Power Of The Dog

ACTOR IN A SUPPORTING ROLE

Jesse Plemons – The Power Of The Dog

J.K Simonns – Being The Ricardos

Kodi Smitt-McPhee – The Power Of The Dog 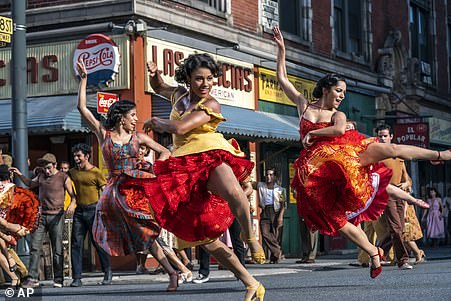 Jumping for joy: West Side Story was nominated for Best Costume Design

No Time To Die 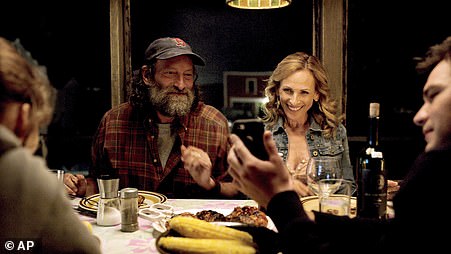 Loud and clear: Coda was nominated for Best Adapted Screenplay

The Worst Person In The World

Affairs Of The Heart

Ala Kachuu — Take and Run

The Hand of God

Lunana: A Yak in the Classroom

The Worst Person in the World

The Power of the Dog

The Tragedy of Macbeth

ACTOR IN A LEADING ROLE

Javier Bardem – Being the Ricardos

Benedict Cumberbatch – The Power of the Dog

Denzel Washington – The Tragedy of Macbeth 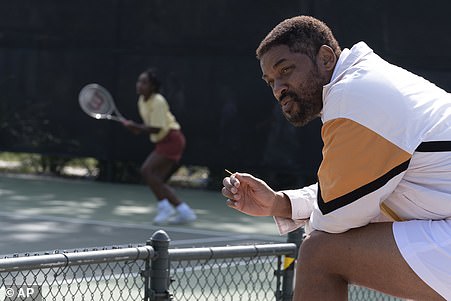 Ace? Will Smith is nominated for Best Actor in a Leading Role for King Richard

ACTRESS IN A LEADING ROLE

Nicole Kidman – Being the Ricardos

Jane Campion – The Power of the Dog 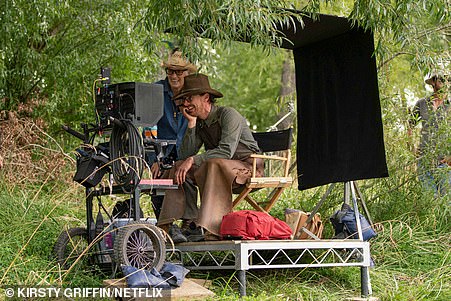 At the helm: Jane Campion is nominated in the Best Director category for Power Of The Dog

The Eyes Of Tammy Faye

The Mitchells VS The Machine

Raya And The Lost Dragon

Down to Joy — Van Morrison (Belfast)

The Queen of Basketball

When We Were Bullies

Summer of Soul (Or, When The Revolution Could Not Be Televised)

No Time To Die

Shang-Chi and The Legend of The Ten Rings 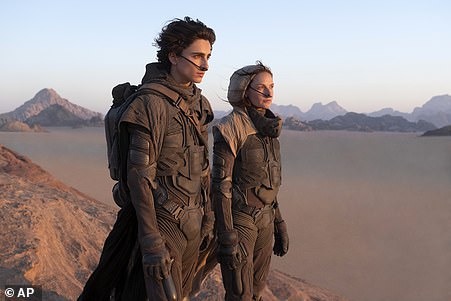